Although the classic GMC Motorhome is sometimes referred to as a “camper” especially internationally in places like Europe; we distinguish campers as Class B RVs.

For reference on this page we cover GMC Campers which includes brand new and pre-owned conversion camper vans as well as camper shells made for GMC Sierra or Canyon trucks.  This includes both conversion, sleeper, 4X4 and other van variations along with camper shells from popular brands such as Leer, A.R.E and Century. 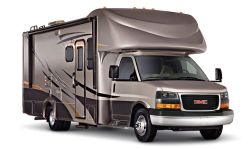 Since GMCs introduction of the Vandura back in 1964, third party companies such as Mark III, Tiara, Coach, Starcraft and others have been modifying or adding to GMC conversion vans in order to turn them into campers and other utility vans.

Camper shells have been a popular aftermarket add-on for GMC Sierras since the late 90s when they were first brought to market. Prior to the Sierra, the GMC C/K was also a popular truck for camper shell additions. This is also true for the mid-sized Canyon and its predecessor the Sonoma.

What is a Camper Van?

The iconic Camper Van commonly combined as campervan and also referred to simply as camper or caravanette is a self-propelled vehicle that provides both conveyance and sleeping accommodation. In the United States the term RV or recreational vehicle is more commonly used and in the US they tend to be bigger as compared to other parts of the world.

While many use the term motorhome interchangeably with Camper Van, there is a distinction in size and cost. Camper Vans are designed to be smaller and more cost effective to operate. Campervans also typically lack live-in amenities such as toilets and showers, while most motorhomes contain these features. Camper vans also typically do not have a divider between the cab and sleeping area.

Many Camper Vans are built with a pop-up or high-top style roof to accommodate more room when camping. Campervans also typically have a small kitchen with fridge that can be powered through multiple choices including gas, battery or electricity. Modern vans may have the following amenities.

Before purchasing an Camper Van, RV or Motorhome; be sure to check with your state’s applicable laws and statues about owning and operating these types of vehicles. Different states have various laws about safety and registration requirements as well as specific concerns about usage areas and emissions. Thank you for following the law!

GMC Camper Mirrors Options: One of the most important safety modifications for Camper Vans is fitting them with extended mirrors to adjust for the conversion. Most conversion vans do not have back windows. This space is used for storage or other camper van amenities.

Because of the lack of windows, a large blind spot is created. To adjust for this, wider towing style mirrors should be fitted to the Camper van.

Rather you are a buyer or seller and have found this site useful to you, please consider donating to help us provide a better user experience.

Use the search box above if you are looking for a specific type of GMC motorhome or anything else unique. If you want to browse by vehicle year or location use the links below.